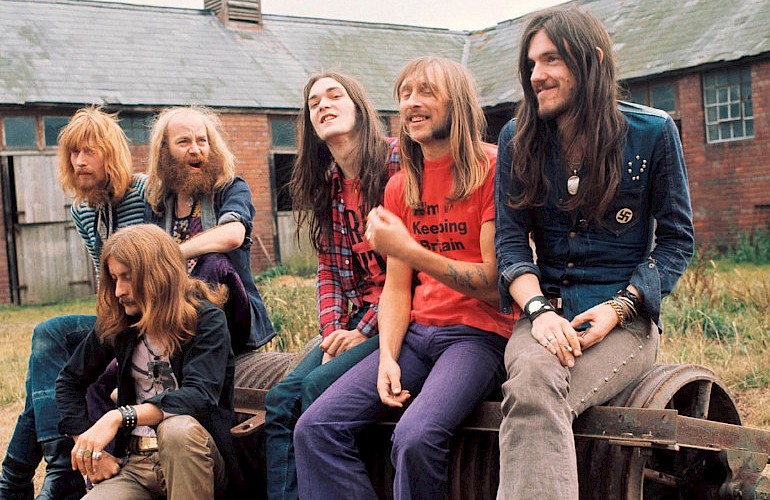 It’s 3AM; a dishevelled group of punks, hippies, bikers and Hells Angels are gathered in a Wiltshire field. We stand before an empty pyramid-shaped stage and wait for the main musical event. It’s 1984 and we are at the Stonehenge Festival.

The Summer Solstice is only a few hours away; soon we will stand within the ancient ring of standing stones to welcome the sunrise on the longest day. But first, there is to be some entertainment, there’s an electrical crackle of sound, some beats on a drum and then Hawkwind emerge onto the small ramshackle stage.

The band perform part one of their set, ‘The Space Ritual’, Nik Turner takes the stage, a battered Saxophone hangs loosely around his neck, he is dressed in a flowing cape and wears fluorescent headgear. He leaps and struts around the cluttered stage waving a glowing sword.

Their set is mesmerising, hypnotic. The sound of Dave Brock‘s guitar reverberates around the site, the audience respond by dancing rhythmically, collectively stomping and shuffling about on the dusty parched-earth.

As dawn approaches Hawkwind close their set and we take the short walk across the Roman road to stand within the historic monument. Hundreds of people talk in hushed tones; it’s a quiet, damp and misty dawn.

We mingle with the crowd, occasionally touching the cool rough surface of the stones. The Druids are dressed in white hooded gowns; some of them carry long hooked staffs. We watch the Pagans perform their sacred rituals; their chant is monotone and somewhat unsettling. At sunrise we make our way back to the festival site.

Hawkwind have already started part two of their set, ‘The Earth Ritual’. Disappointingly, the light of day reveals the finer details; the stage set and performers no longer look quite as magical. It is clear that Nik Turner’s fluorescent headgear is simply a painted skateboard helmet, his sword, a toy Star Wars light-saber. Despite the new visual clarity, the music is fantastic and we stay to listen and applaud to the rest of the set.

This was the very last Stonehenge Festival, the following year the Thatcher Government would instruct the British Police to violently and publicly smash and destroy the lives and homes of the early festival attendees. It was sadly, the beginning of the end of the UK’s non-commercial festival scene.

Disclaimer: This post is based on a somewhat foggy memory of events; there is a very good chance that some of the finer details are incorrect, feel free to correct me via the comment form.

Comments are manually approved, Spam will be detected and automatically deleted.

I am inside an Italian hotel bar, I am alone. The room is long and narrow, it has a minimal brutalist style with smooth grey concrete walls.

The Warehouse: an anxiety nightmare?

I am inside a vast, cavernous, brightly lit warehouse, I am standing on-top of a large wooden box. The box I stand on is stacked upon other boxes.

A Bird in the Bar

A Bird in the Bar - A photomontage.

This is an easy but slightly time consuming side dish. Works great with Salmon and Roast Potatoes.

First the cold breeze on my face and then the nonsensical whispering in my ear.

Psithurism: the sound of wind in the trees

Thousands of fragile tree leaves can be seen silently moving in the gentle breeze, their tubular conducting cells enable each leaf to sway